Reflexite V98, V92 and V97 prismatic reflective films by Orafol are very similar in appearance but have some distinct differences.  Each have specific characteristics that make it most suitable for certain conditions.  The one you select will depend on your application.  To summarize you would use a V92 film when striping flat areas where high initial tack is needed.  You would use V98 where conformability is needed to go over complex curves.

Both tapes are very bright and can be seen from over a thousand feet away in many applications.

Reflexite V98 and V92 tapes are both metalized polyester films. The V92 film is thin and flexible while the V98 film is engineered to be “conformable” as well as flexible.  Conformable simply means that the film will stretch or give a little.  V92 films are fine for flat surfaces or surfaces without compound curves.  V98 films are designed to perform on flat surfaces as well as surfaces with compound curves. 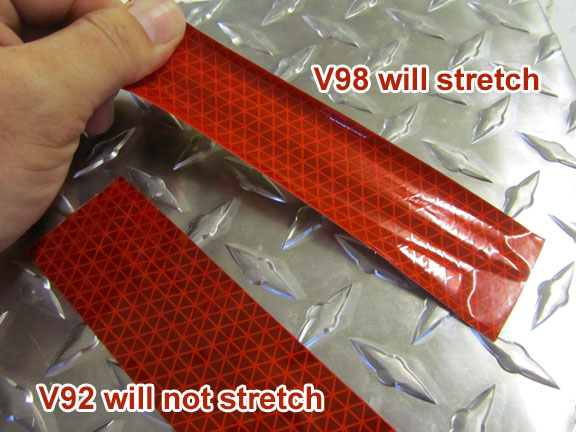 It is important to note that when you install the V98 material you do not want to stretch it like a rubberband and install it.  If you do it will pull back to its original shape.  To take advantage of the V98 materials conformability you would apply it to a surface, warm it with a hair dryer and mold it to compound curves using a soft cloth. 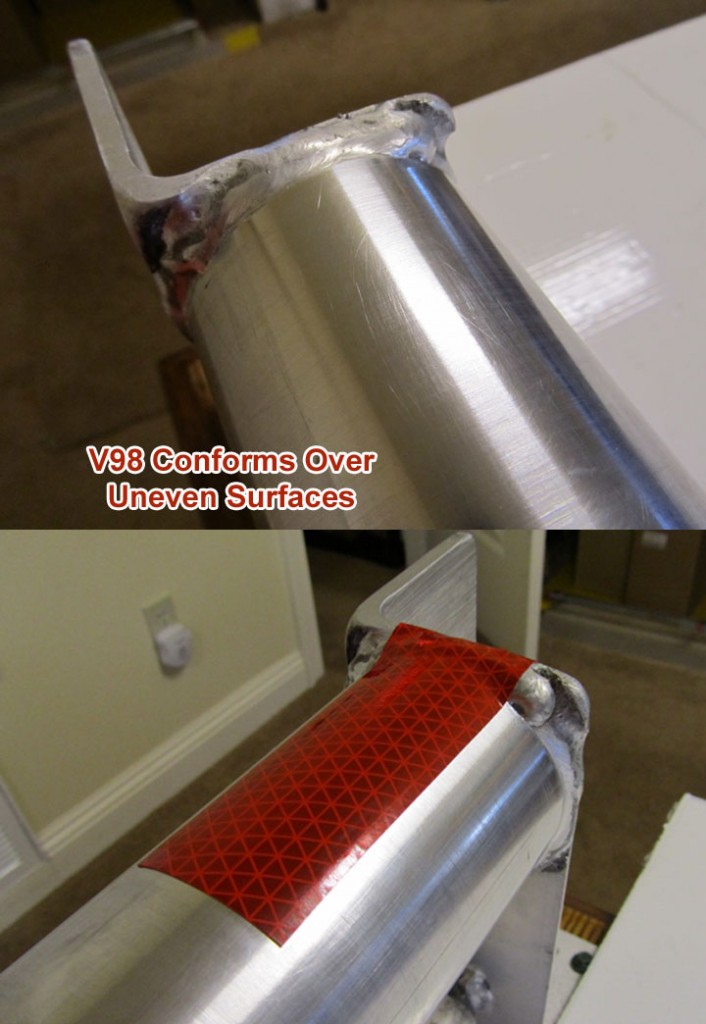 V92 and V98 films utilize two different types of adhesive.  V92 adhesive grabs immediately and does not want to let go.  It is very strong making the tape great for applications where a high initial tack is needed.  The V98 film uses a repositionable adhesive meaning it is less tacky initially and allows the installer to pull it off an reapply if necessary.  The V98 films gain adhesion over time.  If removal at a later date is necessary, the V98 will come off easier and leave a cleaner surface. 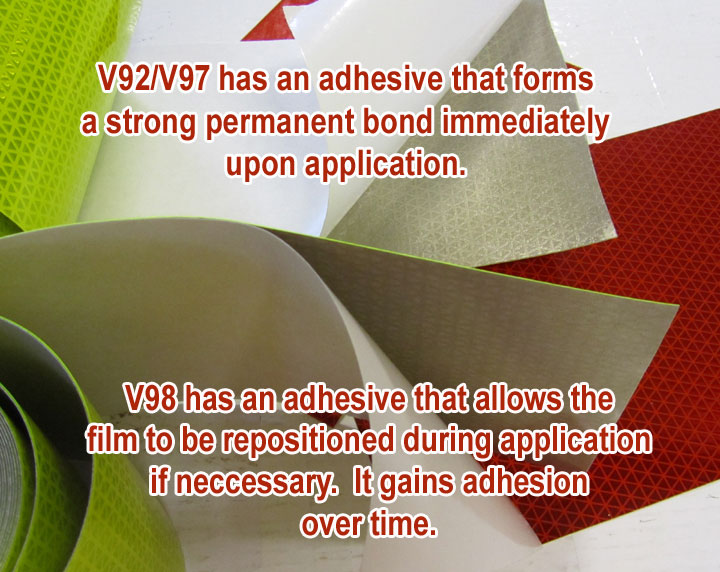 Orafol-Reflexite V92 is less expensive than V98.  If you want a bright and tough yet affordable tape then V92 is the solution.  The V98 is more expensive but if you need a conformable product that is brighter then it is the way to go.

Orafol-Reflexite V92 film is very thin.  About .008 of an inch thick.  This is about like a couple of sheets of paper.  For certain applications a thin film is desirable.  V98 is about twice as thick.  This is still very thin but it is thicker than V92.  Reflexite invented prismatic tape and they make it in a single patented layer which is why it is thinner than the competition.  The single layer design also means that V92 and V98 tapes will not delaminate like other films. 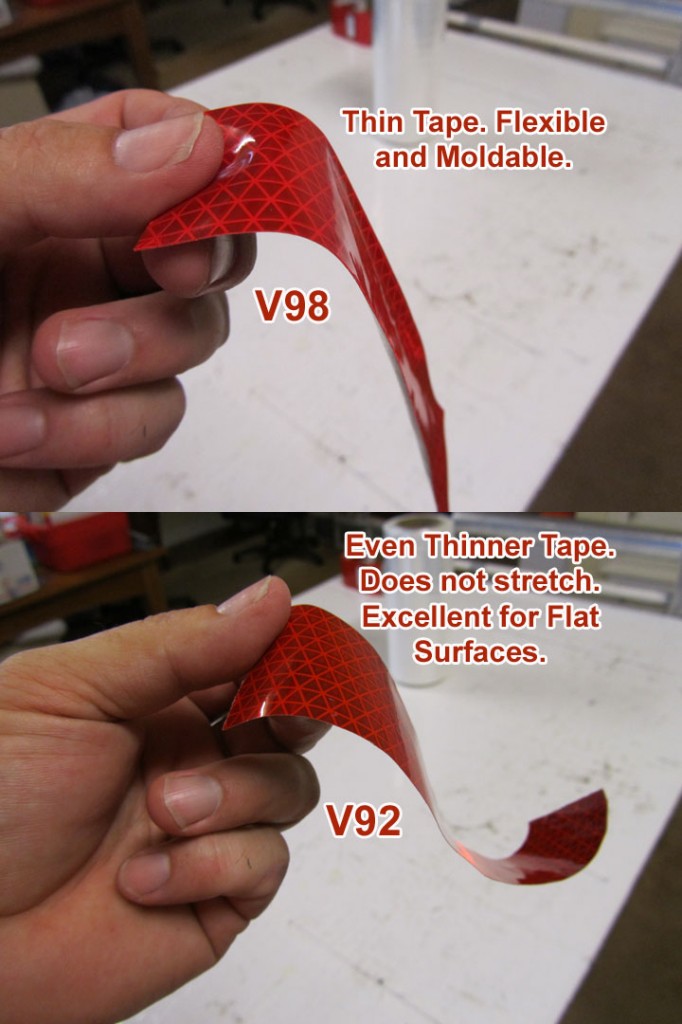 V92 and V98 films look almost identical.  For some colors a slight difference can be seen. 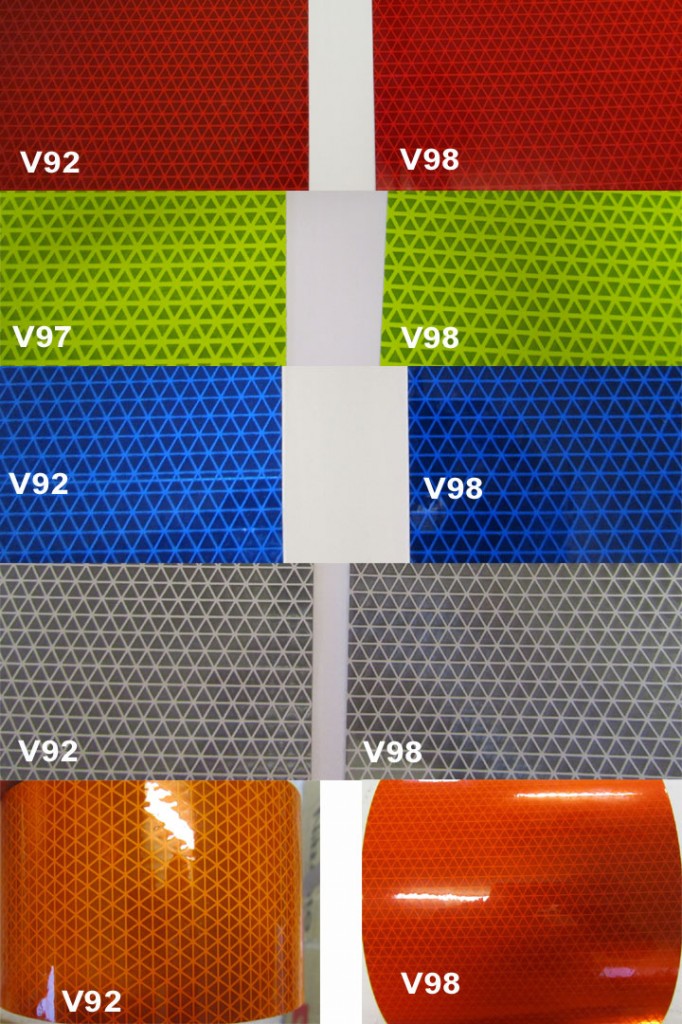 Note – The V98 Orange that we carry is a Fluorescent Orange.  Our V92 Orange is a standard Orange.  That is why the two colors look different.